St Hugh's Foundation for the Arts Award Holder Lee Karen Stow (2019) shares an update on her project Something to Breathe, which was due to launch this week (August 6th 2020) to mark the 75th Anniversary of the atomic bombings on Hiroshima and Nagasaki, Japan.

Something To Breathe looks to the future as a personal protest against weapons of mass destruction.

Inspired by the 1980’s protest song Breathing by Kate Bush in which an unborn child pleads to be left something to breathe, the project uses still photography, motion graphics, voice and sound in an attempt to address and respond to the fact that women and girls are biologically more susceptible to harmful effects of ionising radiation and negative consequences including psychological health, displacement, social stigma and discrimination (Report, UN Institute for Disarmament Research 2016).

The project should have launched this week (Aug 6, 2020) as a site-specific installation in Hull to mark the 75th Anniversary of the atomic bombings on Hiroshima and Nagasaki, Japan, at the Freedom Festival. The installation would have also served as a prompt for a series of public debates and talks about all things nuclear, and linked to the Imperial War Museum’s outreach programme.

Obviously, the actual installation has not been possible to achieve this summer, not least because the physical version of Freedom Festival is cancelled due to Covid-19 restrictions, and instead the festival, like many other events, has moved to a virtual space online. Also, two days before I was due to fly back to continue work with the women hibakusha (survivors) in Hiroshima and Nagasaki, the flight was cancelled and we were ordered into Lockdown. So I was unable to return to complete the work or reach the women I had made contact with at Fukushima, site of the 2011 tsunami and nuclear reactor explosion.

However, despite Lockdown, an eight-hour time difference and a distance of 5000+ miles, we managed to continue with the project. Through zoom, email, WeTransfer and WhatsApp, our visual conversation and collaboration begun in 2015 strengthened. Myself, three women hibakusha - Ms Teruko Ueno, Ms Emiko Okada and Ms Reiko Hada - and their families, assisted by super-translator and fixer, Ms Naoko Koizumi, co-constructed new knowledge that amplifies the voices of some of the female hibakusha in this milestone anniversary year. We recorded testimonies and anti-war messages of hope, gathered found photos from old family albums not destroyed in the blasts, added contemporary digital images I had taken in 2015, and assembled meaningful and original content for online platforms including the BBC (English and Japanese), Imperial War Museum, Freedom Festival and our own social media streams.

Hearing the female hibakusha voice matters because for years after the bombings the women were forbidden to speak about what happened. Now, in their twilight years and as their numbers dwindle, many are eager to speak out and also voice their concerns about the current nuclear situation. It has been such an unexpected year, yet we could not have hoped to reach the millions of viewers across the world, and listeners both online and digital radio.

Before Covid, my initial aim as an artist was to put my own voice forward, having worked since 2007 documenting in photography, words and sounds, the testimonies of women survivors of war, conflict and genocide. Something To Breathe would have been my personal plea to those in power to leave me/us/and especially the unborn child, something to breathe. But as I worked deeper with the women’s material, I realised the timing wasn’t right for my own two-penny’s worth. Their voices needed to be out there, before they are lost to us forever. Our contribution adds to the tremendous work by the cities and citizens of Hiroshima and Nagasaki, and organisations such as ANT_Hiroshima, and ICAN which work day-in, day-out to preserve and disseminate the message and legacy of August 1945.

Instead of taking up space, I created shared spaces for visual narratives; storytelling at its best, through the voices of those who were there on August 6 and 9, 1945. The found photos show Teruko, Emiko and Reiko as they were before the atom bombs fell and before they became, for evermore, known as hibakusha. The response to the showing of these found photos has caused much interest. Perhaps because they show children. Ironically, the message of Something To Breathe.

I continued to photograph the cherry blossoms as flora of war. In fact, youngsters in Hiroshima gathered cherry blossoms fallen from the A-bomb cherry tree still surviving at ground zero. They packaged them safely and posted them for me to photograph. I’ve also uploaded the series to my website if you have time to look. One day I hope to show these images as scrolls. But really I made less ‘art’ and did more listening. I took my own voice off the table, became a journalist again, and shifted my ‘art’ to one side. Not to negate my own voice. There is space for that too, when the timing feels right. And this is why foundations such as St Hugh’s exist, to help the artist gain time to work on what they want to say, to navigate the meaning and reason for their project, provide space for it to take shape and finally, to help make it happen.

What feels right now is to share the journey of this year, and how Yorkshire and Hiroshima/Nagasaki connected despite the chaos and heartache brought by Covid-19. Often, what we don’t see in the smart galleries and public spaces is the raw journey of making art. The long and worrisome hours, the doubts, the hiccups, the unpredictability, the uncertainty of it all. What happens when a pandemic strikes, for instance. I miss the galleries and spaces, of course, and when they return I hope they become even more than platforms for final, polished pieces of artwork. I hope they become shared spaces that show the messiness of making art, and the sharing stories that tell the whole story, warts and all.

I’m thinking of trying to get back to Hiroshima, Nagasaki and Fukushima next April, pandemic-permitting. Hopefully, at Freedom Festival 2021 Something To Breathe will have its final airing in a shared, physical space when we can come together and talk. Because this conversation needs to continue. Because 75 years on from the world’s first atomic bombings on human beings, nine countries possess 13,410 nuclear weapons with almost 1,800 ready to launch within minutes. 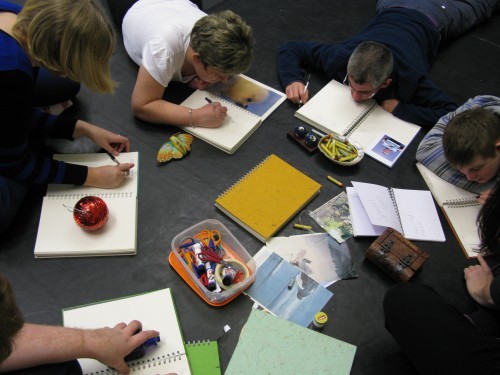 Earlier this year, we were sad to announce that we were not able to proceed with our Arts Awards programme for 2020 as it had been previously advertised, and would therefore not be taking forward any of the proposals made at the first stage of our application process this year. Since making that decision, the Foundation’s Trustees have been trying to identify an alternative offer we could make to artists in 2020, in order to sustain our commitment to responding to the needs of artists in our area of benefit.

We believe that Black Lives Matter, and stand in support of all artists, all people in our area, across the UK and across the world for whom racism and discrimination is part of their daily experience.